Hello! After 15 years producing site specific work, daily, for the Historic Royal Palaces,  I have developed a unique understanding of the tools necessary for the most effective 'guerilla street theatre'. Specifically I have analysed interactions and formatted training, enabling performers to lead the journey of Visitor to Audience and from Audience to Participant in the drama. I am keen to explore how this method can create true community cohesion in Chatham High Street. Here are some links to my projects as Creative Director of Past Pleasures Ltd. The company specialises in historically themed performances.

The two images here are from 1) 2012: Directed ‘Tempe Restor’d’ an ancient and modern fusion masque and digital performance and summer daily offer at the Banqueting House in Whitehall (animated backdrop in collaboration with JB3 Creative, musical composition by John Holland) Image courtesy of HRP and 2) Conwy Castle, 'The Cloak of Invisibility'- one of a series of my creations being repeated (for a third year) thru Summer 2019 : Legends Live, at sites across Wales, for Equinox (marketing organisation for CADW), events depicting real life medieval battles, Victorian cooks and fantastical creatures such as giants and dragons from the stories of The Mabinogion. (Photo courtesy of Louise Baldock) https://cadw.gov.wales/search/node?keys=Legends+Live+2019

Mrs. Bakers Medway Theatre Company: The Vision
With this new company I wish to move away from historical themes, costume and language and set all performances firmly in the modern world, working in the modern idiom.
As part of the project management, my intention is to pursue two distinct streams: a) consolidating local networks for funding and other means of support plus future collaborative working connections and b) creating first catalogues of ideas for the three performance structures: Corporate entertainment, High Street 'Wow moments' and full shows. I have some starter ideas formulated, to give an idea of the directions I wish to proceed in here are two illustrations.

Imagine if you will:
One possible 'Wow moment'!: A Chatham male archetype (typical Chatham working class appearance :sleeveless t-shirt, soiled jeans, carrying beer can and cigarette) and a Chatham female archetype (scraped back pony-tail, t-shirt, leggings, pushing a buggy). They meet in Chatham High Street and start to loudly exchange views with each other. Their words start to become a  rap battle, suddenly backed by a driving beat amplified from somewhere unseen around them, their language becomes heightened - til the insults are positively Shakespearean. They are joined by others who whoop the crowd up into a frenzy supporting one side or the other. Eventually words are not sufficient and the pair face off with careful choreography including the beer can, the cigarettes and the buggy.  The quality is second to none, they are framed by the other performers (also in modern dress),  ensuring a safe distance is kept from shoppers, leaving no doubt that this is a planned, performed piece. The ending shows each one experiencing amazement and pride at the skills and efforts of the other and the two combatants part on friendly terms.

One possible Main Show: Following the same themes as are covered in the weeks 'Wow moments', the main show linked to the above could be an exploration of co-parenting following a split. The main narrative plotline might well be a view of one Chatham family's dynamics, the hurt feelings, ways to express positivity and thoughts about how to deal with the negativity in such a situation and the playing through of conflict resolution techniques. However, this heavy theme is played with a light touch, ensuring the watching audience may be moved, but not brought down by the story. To aid concentration both due to modern society's short attention span and as a reflection of the 18th century theatre model, scenes of the main narrative are interspersed with performance curve balls: eg: A 'Britains Got Talent' show moment (with involvement from the audience), a trick with a dog, or a musical club dance interjection for all to join in.

Why Mrs.Bakers Medway Theatre Company?: Mrs. Sarah Baker (c.1737 to 1816) was a formidable single mother and theatrical entrepreneur. She chose to build her chain of theatres across Medway and further afield (including Maidstone, Tunbridge Wells and Canterbury). Why did she chose Medway? Because of the military and naval connections - she knew servicemen had money they were willing to spend on entertainment - and she was tough enough to bring art to that challenging audience without pretension and in accessible terms. A former dancer at Vauxhall Pleasures Gardens, her troupe included actors, musicians, slack-wire walkers and sword swallowers. She is a (largely forgotten) Medway icon and the Georgian model theatre troupe are both useful instruments for speaking to modern Medway.

For the full evening shows, my modern iteration will utilise the 18th century theatre model, but adapted to the modern 'Britain's Got Talent' viewing public. For street theatre 'Wow' moments, this will include full and frank debate and exchange of views, with fearless professional performers who are able to keep command of the overall shape. Topics for both the ‘Wow’ moments and productions, can cover issues at the heart of local concerns. Always starting with a light touch, but then taking the participant/audience on a journey to explore the difficult subjects in an enlightening and helpful way.

For more unpacking of Wow moment and my unique performance methods, please click 'Learn More' below each of the 'My Skills' categories below. Scroll down further to find a timeline with links to videos of my performances and training techniques. 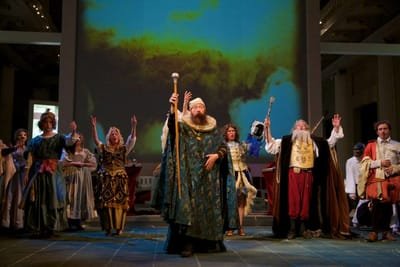 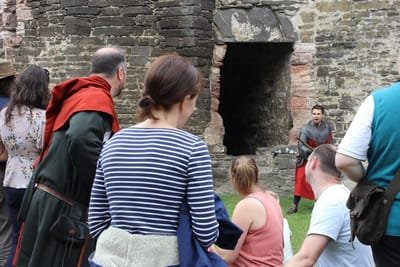 Event creation - The vision for corporate entertainment for MBMTC

Training my performers in interpersonal communication techniques, I create events in which the visitors have true agency and can change the course of events. They are gently seduced into becoming players of the game, not merely observers. Without their participation, the action can't move on.

Scripted pieces are played in appropriate period theatrical style, or that style is dramatically disrupted by the impact of the modern world.

Examples of my work

Coverage of the schools sessions I created starts at 1:59 and the promenade theatre piece coverage starts at 9:46. https://www.youtube.com/watch?v=R8ci7F14ynU#action=share

This project has just been announced as the winner of the 2019 AHI Award (Events and Activities). To see the short English Heritage film on this project, copy this link: https://www.youtube.com/watch?v=i2uL-h4svVg Or, to see the dress rehearsal of the full piece, copy this link: https://warwick.ac.uk/fac/arts/modernlanguages/research/french/currentprojects/stagingnapoleonictheatre/roseliska

Here is a link to copy to the first of four training videos I created for Past Pleasures Ltd. They are about live, historical interpretation and are intended for all practitioners from volunteers to seasoned professional actors. https://www.youtube.com/watch?v=Wxt3-Awq2x0

I have created, directed and appeared in many of the daily programme events across the Historid Royal Palaces over the years. As they are live events, the trailers are not always indicative of the actual piece and recordings never quite capture the dynamics of being there! However, here are a couple of tasters. Firstly What Would Walter Do? (Tower of London offer October Half Term 2018) Trailer: https://www.youtube.com/watch?v=ISf5M5ircwI Secondly a dancing snippet of an event at Hampton Court Palace: https://www.youtube.com/watch?v=DtFMIVUDB

I BUILT MY SITE FOR FREE USING